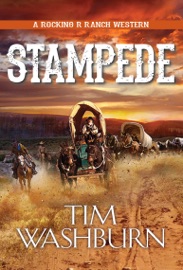 One of the biggest land grabs in America’s history sets off a powderkeg of trouble for the Ridgeway family ranch—and ignites a deadly new fight for the fate of the nation . . .

At high noon on April 22, 1889, the U.S. government offered up two million acres of free land to anyone brave enough to take it—first come, first served. The fact that it was in the heart of Indian Territory didn’t stop thousands of would-be settlers from trying to stake a claim. For them, it was the opportunity of a lifetime. But for the Ridgeway family—and the native tribes of the region—it’s a disaster waiting to happen. On top of warding off cattle rustlers, they now have to compete for everything they have just to hold their ground. Together they will  face every battle head-on to keep their dream alive . . .

History would call it the Oklahoma Land Rush of 1889. But the Ridgeways—and thousands like them—will call it their last stand for justice, and a place to call home . . .