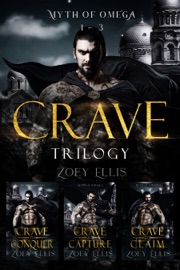 From a brutal, magical world comes a blistering-hot fantasy romance series featuring possessive alphas and the women they will not let go of. Plunge into this “must-read” epic world and prepare for addiction.

Her mission seemed simple: hide in plain sight, search for his secrets, and under no circumstances draw his attention.

Posing as a researcher, Cailyn infiltrates the palace of the savage ruler known as Emperor Drocco. He is on a crusade to find the omegas that have been missing for over a century and craves to find his mate. While reviewing his files, Cailyn never expected to meet him.

But their attraction is instant.

Unfortunately, Drocco is the most intolerable male she’s ever had the displeasure to encounter.

He rarely leaves her side, inflicting his bold arrogance, heated gaze, and alpha dominance in a way that infuriates her.

Yet their intense attraction captivates her in a way she cannot resist.

As an omega spy, Cailyn knows she must slip away. If she falls prey to Drocco’s growing obsession, her deception will be uncovered and she will be at the mercy of his legendary ruthless vengeance.

But unbeknownst to them both, she is the omega he seeks.

The CRAVE TRILOGY contains the complete dark and consuming fantasy romance story between Emperor Drocco and Cailyn, including books Crave To Conquer, Crave To Capture, and Crave To Claim as well as their bonus scenes and an EXCLUSIVE bonus epilogue. For fans of Alpha anti-heroes, feisty heroines, and captive romances. This story includes romance of a dark nature.