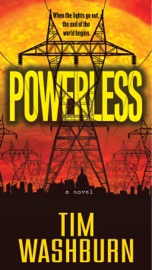 When a disaster plunges civilization back into the Dark Ages, one man will do whatever it takes to reunite with his family in this apocalyptic thriller.

It strikes without warning. A massive geomagnetic solar storm that destroys every power grid in the northern hemisphere. In Boulder, Colorado, weather technicians watch in horror as civilization collapses around them. Planes are falling out of the skies. Cars are dead. Pandemonium and terror grip the planet.

As nuclear reactors across North America face inevitable meltdowns, the US President remains powerless in a heavily guarded White House. From London to Boston to Anchorage, there is no food, no water, no hope. It's every man for himself. . .and it will only get worse.

Army veteran Zeke Marshall is the one man prepared to handle a nightmare like this. But when he tries to reunite with his family in Dallas—across a lawless terrain as deadly as any battlefield—he discovers there are worse things in life than war. And what he'll have to do to survive is unthinkable . . .